3/4/2022  The war in Ukraine is proving a tense time for cable producers like Leoni, Nexans and TFKabel which have units located in the Ukraine. In this Insight we have a brief look at how producers are dealing with the unfolding situation and also what role Russia and Ukraine play in the cable markets in general. We will provide a further update next week. The CRU International Report says...

Effect on producers located in the Ukraine

At the time of writing, France’s Nexans told CRU that it is monitoring the situation and continues running two out of its three automotive wiring harness plants that it has in the Ukraine. The plants of Peremyschljany and Zolochiv are still running. However, its unit at Brody has been temporarily stopped. The three units employ a total of 2771 people.

“We are in close and regular contact with our customers, and we are following the situation very closely in order to adapt as best we can and avoid any disruption to our business. Safety of our employees is our absolute priority. The evolution of the situation is being closely monitored and will adapt to the extent possible the protection measures of our employees on the sites,” a spokesperson told CRU.

Germany’s Leoni told CRU Wire & Cable News that it has stopped production of wiring harnesses at both its sites in the Ukraine, which employ 7,000 people. Leoni production is located at Stryji and Kolomyja in the southwest of the country in regions close to the EU border. “The safety of our employees is our top priority. Immediately after the combat operations began, we decided to temporarily suspend our production at both plants and send our employees home until the situation can be better evaluated," a Leoni spokesperson said. 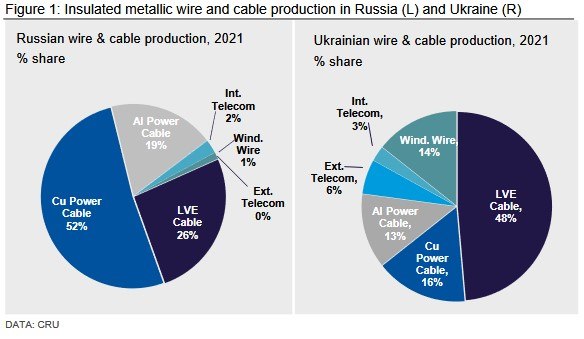 The company said that a dedicated task force will closely monitor the course of the conflict and its impact on the company’s sites, and is also in constant contact with customers and suppliers.

“With regard to the impact of international sanctions on Russia, we are monitoring the situation very closely to enable us to adapt and limit the potential impact on our supply chain. Russia and CIS represent less than 0.5% of our Group sales,” a Nexans spokesperson explained.

CRU data shows that Russian wire and cable production is predominately made up of power cables (71%), with LVE cables comprising 26%. The country’s impact on the wider cable market is relatively minimal. It only has a 2% share of total European exports and 4% share of East European exports. Over the past three years, Russia’s two main export destinations have been Kazakhstan and Belarus. Both countries accounted for 61.2% of total Russian cable exports.

Meanwhile, China and Belarus made up 63.1% of the cable imports into Russia for 2021. 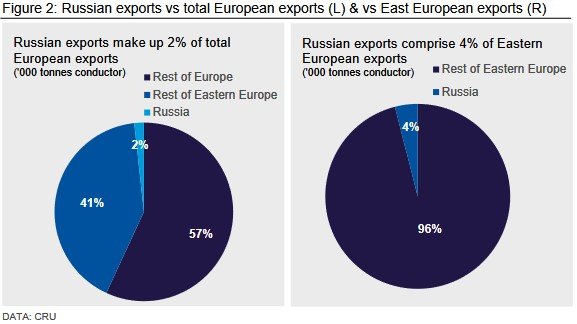 The effect of a further escalation of the conflict on Ukraine’s cable trade is uncertain. Poland is an important trade partner for the Ukraine, both for imports and exports (see Table 1). In 2021, most of the exports to Poland were for wiring harnesses (72.5%) and LVE cables (25.5%), while the majority of imports were for LVE cable (90.1%).

CRU will be keeping subscribers up to date over the coming weeks. Visit the CRU website for more information by visiting: https://www.crugroup.com/ 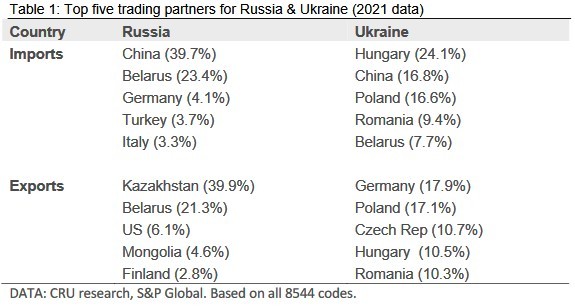